Last year I asked my readers which body part they were most interested in learning how to train.

The number one answer was legs.  Now, I would argue that it’s best not to think of “legs” as a single body part, but whatever- I gave the people what they wanted- my leg training guide is still one of the most popular articles on this site.

The glutes were, I believe, the third most popular answer at the time.  Lately I’ve been getting more and more questions about glute training though, and since I’ve always been a butt man, I decided to go all out on this one.

That’s why I wrote a massive 27-page guide to glute training, covering everything from gluteal anatomy, to determining training volume, intensity and frequency, to advanced training techniques for supercharging your booty workouts.  And of course, there are workouts.  Six of them.

Since it’s so long, I’ve split it into three parts for the purpose of publishing it on the blog- but there’s a link to download the whole thing at the end of this article.

Anatomy of the Gluteal Muscles 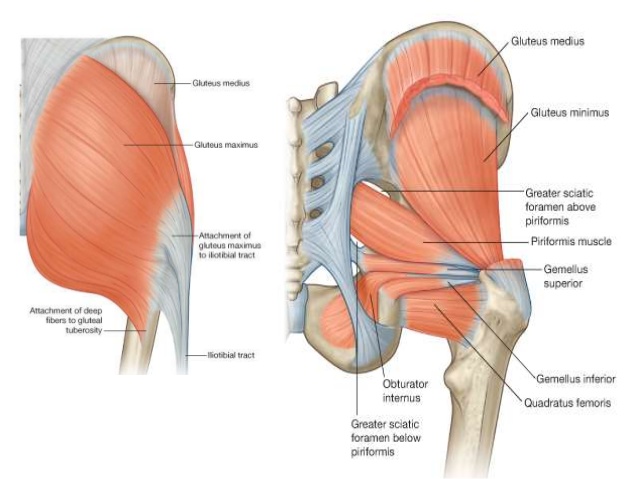 To build a juicy, well-toned ass, you need to train all of these muscles.  That means you need to perform a variety of movements, including some that most people wouldn’t think of as butt-building movements.

Here’s a quick run-down of the major muscles of the gluteal region:

A well-developed gluteus medius makes your hips appear wider, which also makes your waist look slimmer by contrast.  This may or may not be desirable, depending on what sort of figure you’re trying to build.  To put it another way- building the gluteus maximus will make your butt bigger from front to back while building the gluteus medius will make your butt look bigger from side to side.

The gluteus medius is responsible for rotating the hip both internally and externally, but those movements are hard to practically train- your only options are some weird cabe and band exercises that don’t have good strength curves.  Its main function is hip abduction- moving your legs apart- when your legs are straight, and that’s the main movement you’ll use to train it.  Like the gluteus maximus, it’s slightly slow-twitch dominant.

Gluteus minimus- The gluteus minimus lies underneath the gluteus maximus and medius.  It’s never visible, and as such it is of less aesthetic concern.  Building it up will make your but look bigger, but won’t contribute to muscle definition at all.

The gluteus minimus contributes to hip extension and abduction, which means you’ll train it when you train the gluteus maximus and medius, and you don’t need to pick exercises specifically to train this muscle.  Like the others, it’s slightly slow-twitch dominant.

All the other small muscles- I’lll address these as a group.  The other muscles of the butt lie underneath the glutes and contribute nothing to the appearance of muscle definition, and only contribute slightly to the apparent size of your butt and hips.  They are more important from the standpoint of functional strength than aesthetics.  Like the glutes, they’re mostly slightly slow-twitch dominant.

The piriformis contributes to hip abduction- pushing the legs apart.  But whereas the glutes mainly abduct the hips while your leg is straight, the piriformis comes into action when your legs are bent, i.e. in a seated position.  More on this later.

The other little muscles mainly contribute to balance, particularly when you’re balancing on one leg.  You don’t need to train them specifically, but you will train them.

tl;dr: There are a lot of muscles in the posterior region, but the two you need to concern yourself with are the gluteus maximus and gluteus medius. Now that you have a basic understanding of the muscular anatomy of the posterior region, you’re equipped to understand some of the big mistakes that otherwise knowledgable trainees make in trying to build a toned, muscular butt.

Mistake #1: Not working every muscle in the butt

As you saw in the previous section, the various gluteal muscles are responsible for several different movement patterns, and you need to train all of those movement patterns to build a world-class butt.

Exercises for the main part of the gluteus maximus- Glute-ham raises.  The bottom portion of back and front squats.  Hip thrusts.  Glute kickbacks.

Exercises for the bottom of the gluteus maximus- Standing or seated hip adduction.

Exercises for the gluteus medius- Hip abduction, but only in a standing- not a seated- position.  The cable unilateral hip abduction, for instance.

Exercises for the gluteus minimus- As mentioned earlier, you don’t need to worry about this.

Exercises for the piriformis- Standing or seated hip adduction.

Mistake #2: Emphasizing the Thighs at the Expense of the Glutes

The glutes are mostly used in the same exercises as the muscles of the thighs.  Many people focus on compound movements because they give more bang for your buck than isolation movements.  While this is generally a good principle to follow, it can easily lead to under-training the glutes because every glute exercise you do is actually a thigh exercise first and a glute exercise second.

Fix #1: Use a full range of motion with squats and leg presses

Squatting is awesome and you should definitely be doing it.  But the glutes only come into action at the bottom of the squat, so you need to squat deep to really work your glutes.

Part of the reason people don’t squat deep enough is because the bottom of the squat is the hardest part- it tends to be the sticking point.  What happens a lot of times is that people will subconsciously avoid this sticking point, making their squats shallower and shallower with each rep and thus underworking the glutes.  More on sticking points in a bit.

As mentioned earlier, hip extension primarily depends on the hamstrings when the leg is straight, and the glutes when the knee is bent.  Failure to understand this leads many lifters to have underdeveloped glutes, despite having strong hamstrings and doing a lot of “glute exercises.”  Good bent-knee exercises include hip thrusts and glute kickbacks.

I used to be a big proponent of pre-fatiguing.  If you’re not familiar with the term, pre-fatiguing, or pre-exhaustion, is a form of superset or exercise ordering in which an isolation exercise is used before a compound exercise that works the same muscle- hip thrusts before squats, for instance.  The idea is that the muscle will be fatigued from the isolation movement, then further exhausted in the compound movement, where other muscles will give it a boost and allow it to be worked for more volume.

The problem is, studies have shown that pre-fatiguing a muscle reduced muscle activation in the subsequent compound movement.  Yes, those squats will feel like they’re blasting your glutes, but only because your glutes are weakened at that point- they’ll actually be less productive than if you hadn’t pre-exhausted your glutes.  Not only that, but since the weakened glutes become a sticking point for the squat, your squats will do less to build your legs and lower back as well.

In this case, your best option is to do the exact opposite: work the glutes with compound movements, then work them more with isolation movements.

Mistake #4: Getting Hung Up on Exercise Sticking Points

What do I mean by sticking points?  I mean the part of the exercise that’s hardest.  Most exercises have one part of the movement that’s harder than the rest, and this part is almost always the part where you hit failure.

With most pressing movements like squats and leg presses, it’s the bottom of the movement- if you squat with a full range of motion, you’ll eventually get stuck at the bottom of the squat, unable to get back up.  Now this sounds like it might be desirable for glute training, since the bottom of the movement emphasizes the glutes, but it isn’t.  Most people consciously or subconsciously avoid that sticking point, either by doing fewer reps than they should or by gradually making their squats shallower as their glutes get fatigued.  All of the muscles involved in the squat- even the glutes- would get trained better if the sticking point wasn’t there.

To fix this, you’ll need to match the exercise’s strength curve ti its resistance curve, so that no particular point in the movement becomes a sticking point.

Accommodating resistance is the technical term for resistance that is lower at the hardest part of a movement and higher at easier parts of the movement.  In practice, this is achieved by replacing about 20% of the barbell weight with chains or elastic bands.  Since chains are heavy and not fun to carry around, you’ll probably want to use bands.  In fact, resistance band training in general is a great strategy for building your lower body, especially if you want to do some of your workouts at home.

A meta-analysis showed that using accommodating resistance leads to significantly greater strength gains in the bench press and squat.  And the effects were huge- one study found that adding resistance bands tripled the amount of strength and power that trained subjects gained in the squat compared to a control group.

You’ll need a squat rack, which you should be using anyway for safety, and a pair of resistance bands. Note that those bands are sold singly- you’ll need to order two.  The listed resistances are the amount applied when the band is minimally and maximally stretched, respectively.

The bands can be attached to the top or bottom of the rack, but are usually attached to the bottom since that’s easier to reach.  This video shows how to attach the bands.

That’s all for part one of this guide.  In part two, I’ll share eight advanced training techniques you can use to blast your glute training into overdrive- and then I’ll show you how to determine how often to train your glutes, how heavy your weights should be when training them, and how many total sets per week to do to maximize your gluteus maximus.

If you don’t feel like waiting until then, click here to download The Booty Bible, my complete guide to glute training that compiles all three of these articles plus a few extra tidbits.